I have been  trying to get the little one to eat something ,after trying many things in vain ,I finally took my friend’s suggestion ( thanks meenakshi !)  of giving it diluted milk , I used a filler and vola !!!! it was amazing ! it took to it pretty quick ! 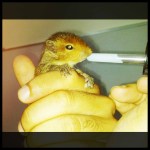 That was a good relief for me !!!… Though after that I tried some semi solid food  , but didn’t work out ,  My dad had these as pets in his younger days , so  was something like  father like son thingy 🙂 , and they were pretty much abundant during those days , even in  my younger days when I used come here for hols  I used to  notice so many , but sadly their numbers have reduced ..at least I  don’t see them much in  my area , still wonder about the little one’s  back story though.